During his decades-long career as a lawyer, which included outrageous stunts in the courtroom and gossip column-worthy affairs outside of it, there is one thing that enemies will use to smear A. Charles Peruto Jr., known to friend and foe as Chuck.

In May 2013, while Chuck was downashore in his lavish Avalon home, 26-year-old paralegal/girlfriend Julia Law died in the bathtub of his four-story Center City townhouse. 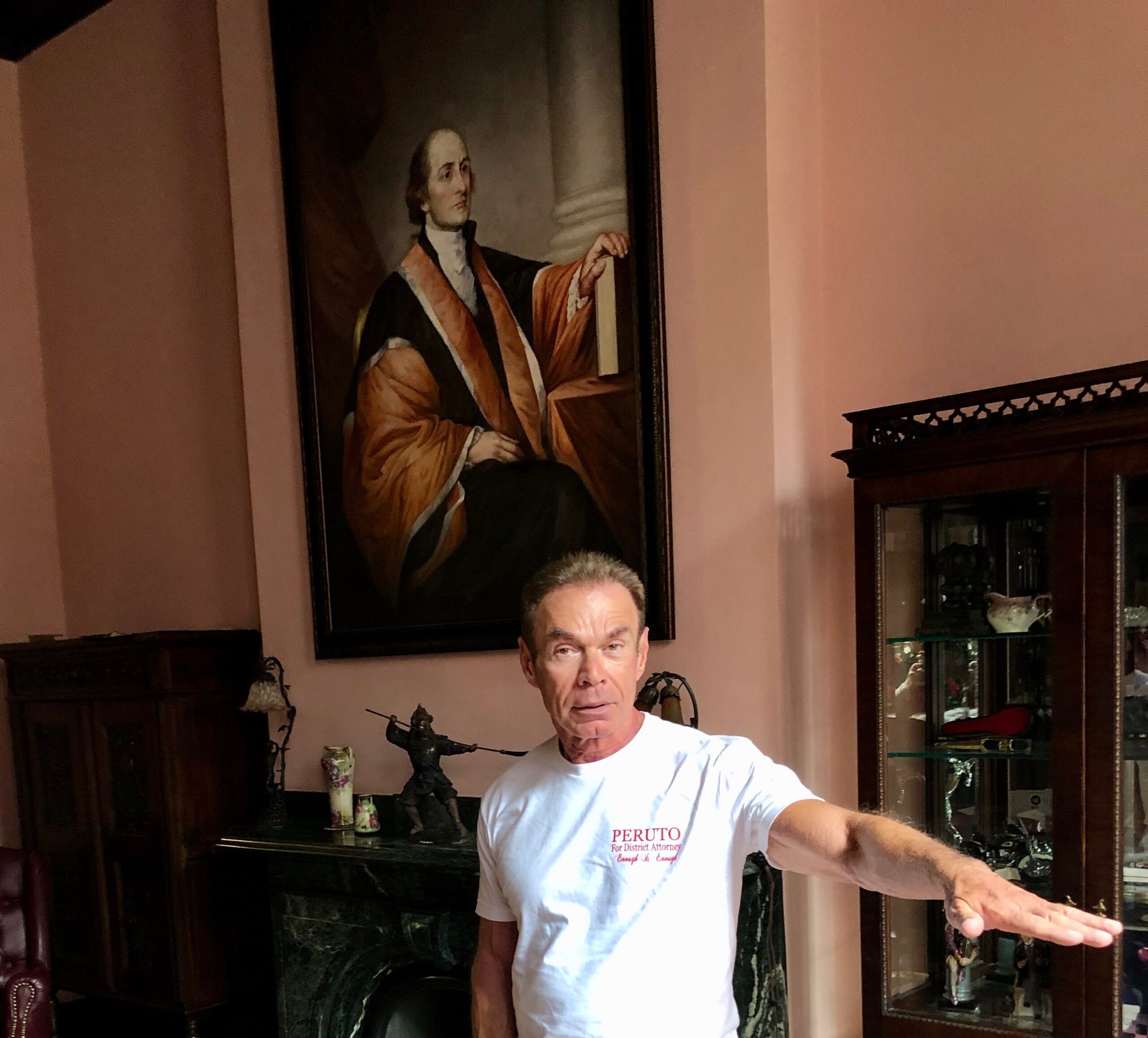 These are the facts:

Woman dead in Peruto’s home. Peruto not there.

Peruto taken in for questioning, naturally.

Peruto talks to cops for seven hours, unnaturally, without a lawyer present.

Defense attorney Peruto would kill a client who did that.

So why did Peruto do that?

Because he was innocent, which is different than “not guilty, ” he explains during a conversation in his new office/home — a $2.9 million Center City mansion he bought about three years ago.

In addition to cell phone traffic that could conclusively prove Peruto was downashore on the night of the tragic incident, he was seen by scores of people in the Princeton beach bar in Avalon, and he left with Eagles linebacker Trent Cole.

Despite an air-tight alibi, no means, no opportunity, and no motive for a crime, D.A. Seth Williams took the unusual step of empaneling a grand jury to probe Law’s death.

No one can peer into the mind of Williams, who was later sentenced to five years for bribery and corruption, but some attorneys whispered it was payback for all the times Peruto had whipped Williams’ staff in court.

By a curious coincidence, Carlos Vega, the man who ran against D.A. Larry Krasner in May’s Democratic primary, was the prosecutor assigned to the bathtub case.

I asked Vega for his opinion of Williams’ intent in ordering the grand jury. Vega says grand jury proceedings are secret and he would venture no opinion.

The grand jury embarrassed Williams by refusing to indict Peruto.

The man who wants to be your district attorney is willing to take a break from his 42-year career as one of Philadelphia’s best known and most successful defense attorneys.

His father, A. Charles Peruto, was a Philadelphia legal legend up until his death in 2013, a defense attorney famed for using folksy warmth to seduce juries into seeing things his way. Chuck’s tactic is to entertain. “A laughing jury never convicts,” he says seriously. In court, he is The Entertainer.

In one memorable case, he defended a county detective charged with beating his girlfriend, who happened to be a judge.

She claimed he had beaten her, but instead of calling 911, she first called a police captain friend of hers who rushed over to her apartment, to stage the scene, Peruto told the jury.

The judge then called 911, claimed to be in death throes and slipped unconscious to the floor at the conclusion of the call.

Peruto acted out her testimony, winding up on the floor, in mock unconsciousness, splitting his pants. The jury roared with laughter — and did not convict.

Behind closed doors, many of his colleagues say that Peruto is a hot dog, a term he would relish.

Peruto jokes he “tricked” his second wife, Lindsey, 34, into marriage in 2019 by “always making her laugh.” In a self-effacing addendum, he says, “it makes up for my ugly mug.” The mug is Keith Richards’ leathery when he smiles, but not ugly.  He says laughter “caused me to be successful in all walks of life.”

He met Lindsey Glasgow at the aforementioned Princeton beach bar. Before long, she ended his 35-year run as a bachelor, man-about-town and serial romantic who loved often and well, but not for long.

A native of Hollidaysburg, Pa., near Altoona, Lindsey knew of his reputation as a ladies man, of course. Neither had marriage in mind when they started dating and were surprised when their mutual interests, and laughter, drew them into a serious relationship.

What did she think when she heard the girl-in-the-bathtub story?

“I knew he had nothing to do with it. He doesn’t have it in him to do harm to a person,” she says.

But he would be willing to harm bad guys.

Now settled, after 42 years of service to various scumbags accused persons, the millionaire attorney (he has a profitable sideline as a residential developer), wants to be of service to you, and to his three grandchildren, who are even more precious to him than his classic car collection. He’s not in Jay Leno’s league — although he has met the comic at car shows — but won’t reveal how many vehicles he has. Let’s just say he has more cars than days in the week.

“The office was in dire need of reform. We were coming out of a term with a convicted felon as district attorney who went after me for no reason. I wanted someone who was going to turn that office upside down, but I truly didn’t believe it was going to be this upside down.”

He mentions Krasner’s hires of numerous out-of-town  progressives — about one-third of whom couldn’t pass the bar exam, his failure to prosecute gun crimes, and his reported lack of empathy for victims. Krasner earned the nickname of Let ’em Loose Larry, for his willingness to reduce charges and waive bail on dangerous suspects.

These are serious indictments.

In passing, Peruto calls himself a “law and order” guy, which sounds strange coming from a mouthpiece whose clients include organized crime figures.

“One is my living, one is personal philosophy,” says Peruto, whose campaign slogan is “enough is enough.”

Peruto believes Krasner’s  Achilles heel is his arrogance “To those who know him. To those who don’t know him, his lack of respect for the city’s citizens,” he says.

“He’s not going to budge from his agenda, even if the number becomes 1,000 homicides a year.”

The spectacular rise in homicides is what spurred Peruto to run, but even after he announced as a Republican, he said he would quit the race if Democrat Vega beat Krasner in the May primary.

Vega got whipped 65-35 in a race that most political prognosticators believed would be much, much closer.

Republican City Committee chair Martina White says the Philly GOP “will support Chuck to the fullest extent that we can, including financial support,” but she would not attach a price tag.

The GOP will do its own advocacy and digital campaigns, she says, and hopes to get Peruto before some national people “interested in seeing that these progressive D.A.’s have real challengers.”

Vega says he spent close to $900,000 in his losing effort, but he couldn’t get free media as can freewheeling Peruto.

The last Republican to be elected D.A. was Ron Castille in 1985, who had the advantage of running for an open seat against a Democratic nonentity. Castille campaigned everywhere, often appearing on crutches that drew attention to the leg he lost as a combat Marine. Castille eventually became Chief Justice of the Pennsylvania Supreme Court and has endorsed Peruto.

But Castille’s victory was a long time ago.

In this contest, Peruto is reaching out to what he believes are overlooked and crime-threatened ethnic communities. Peruto talks to potential voters from the shoulder in a manner that sometimes can seem offensive. You find no arrows of Political Correctness in his quiver.

“Having represented hundreds of Hispanic defendants over my career, I have learned a great deal about how their communities, religion, and politics operate. They, most of all, feel left out and unrepresented.”

Likewise, he says the Russian and Asian communities are marginalized. “The Asian community in particular, seems to be targeted for many scam type crimes, which go ignored,” he says. “This city is not just black and white.”

Unlike Krasner, so-called “small” crimes will be prosecuted. Krasner’s refusal, for example, to prosecute shoplifting for less than $500 amounts to “free Christmas shopping,” says Peruto, who is known for his wisecracks.

He will not pursue illegals living in the shadows, he says, but if they commit a felony, he will prosecute them, send them to jail and deport them when they get out. He threatens to prosecute anyone — hello, Mayor Jim Kenney — who interferes with the prosecution.

During the primary D.A. debate, when the issue of academic studies was raised, Peruto held up a trash can to show contempt for pointy-headed profs.

He opposes so-called “safe injection sites,” where people break the law by injecting illegal drugs. Rather than perpetuate addiction, he would force addicts into rehabilitation in repurposed county jails that are now empty.

He says he would like to see a change in police culture, starting at the academy, with more education in psychology and knowledge of neighborhoods, but he will back up cops when they lawfully carry out their duties.

Social justice warriors won’t get a pass. “George Floyd’s memory is ill-served by refusing to prosecute looters and burglars,” he says.

We closed our conversation with what seems like an anomaly in the primary vote.

The areas of strongest turnout for the prosecution-averse Krasner were identical to those with the highest homicide rates.

I think it is a demonstration of political ideology over self-interest. Peruto disagrees, and offers a startling explanation.

“I can sugar coat this, but I am going to come out and say it. These people, they have a family member serving life in prison, a cousin, a friend who they think was wrongfully convicted and Larry Krasner gives them hope,” he says.

“If someone who believes they were wrongfully convicted and brings me a case, I will look at it, but I’m not running for public defender.”

And he’s not joking.